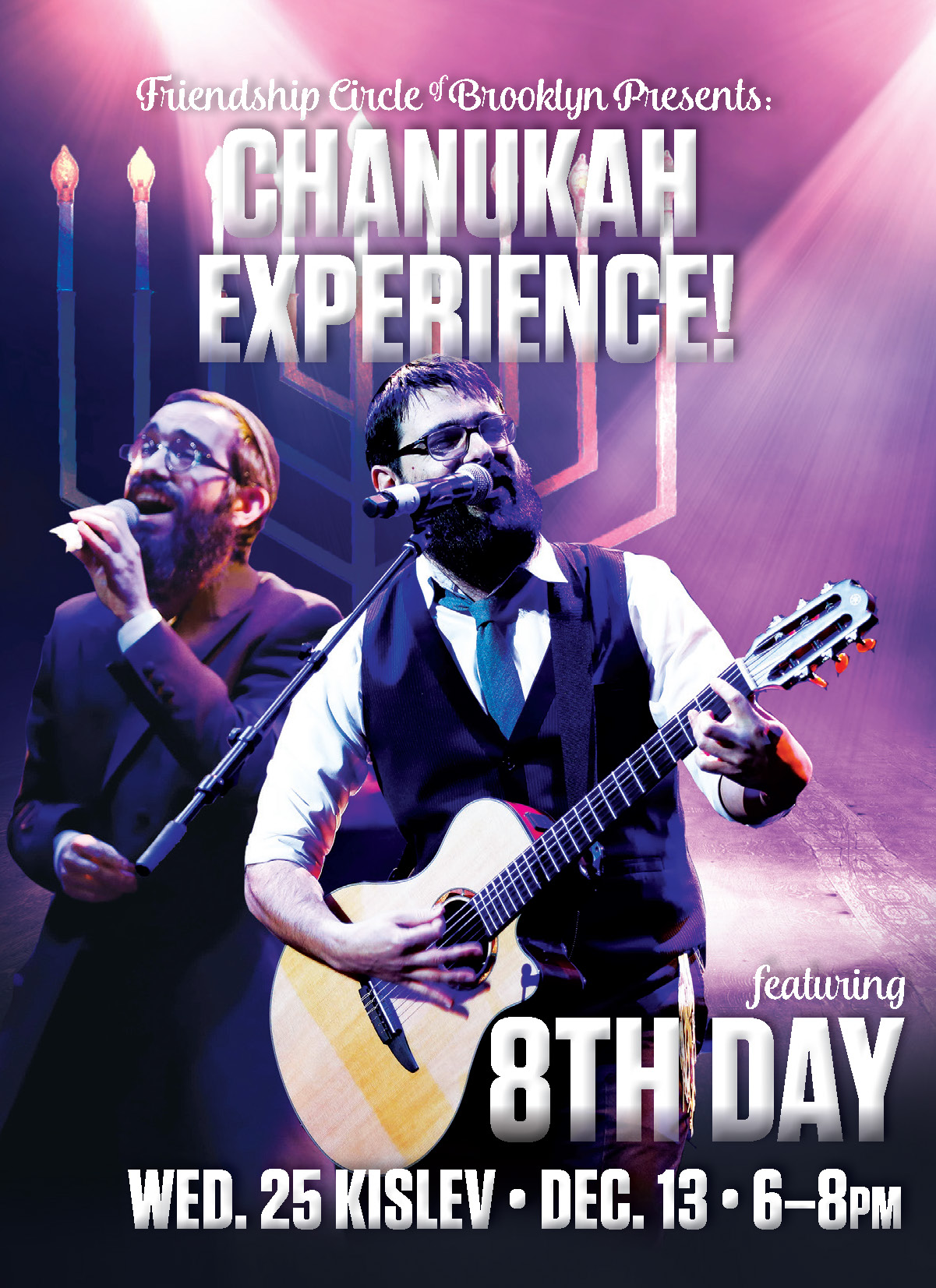 It was a cold winter night on the second night of Chanukah. Families with children with special needs got a warm welcome as they walked into a beautifully decorated Rosa Hall. Over 400 people attended this exclusive Friendship Circle Family Chanukah Party.

The hallway entrance boasted a long array of tables, each one offering something special to every single person who walked in. As the families arrived, they received specially designed T-shirts for the event. Every child was given a goodie bag filled with special treats, glow sticks, and fidget spinners donated by Bestie Toys, a company that creates extraordinary sensory toys for children with special needs. As the families continued down the line of tables, they had the opportunity to take a family photo at the Chanukah photo booth and take home a spectacular framed photo souvenir!

A gorgeous display of Latkes, doughnuts, and drinks greeted the families in the main hall. There was a backdrop specially spray painted by Alter Deitsch wishing everyone a happy Chanukah. A large Menorah graced to stage, to be lit later on in the evening.

The lights dimmed, and the band stuck a chord. Everyone rushed to their seats in anticipation. It was time for the concert to begin! Eighth Day opened the concert with their hit song “All You Got” and everyone started clapping along. A cheer rose up from the crowd as Eighth Day started to sing “Inner Flame,” and everyone waved their glow sticks to the beat in “Celebrate.” Some boys near the front got a chance to sing in the mic during “Cheery Bim” and “Hooleh!” The crowd burst into dance as Eighth Day began to sing their newest Chanukah single, “Miracle of Light.” What an energy!

Then, the music quieted and it was time to light the Menorah. Everyone directed their attention to Friendship Circle’s own in-house Chazzan, Yehuda Reichman, as he lit the Menorah and sang a moving rendition of Haneiros Halalu. Soon enough, the music picked up again and everyone had their arms around each other as they danced to “Tracht Gut,” “Ya’alili,” and “Moses in Me.”

As the music slowed and the concert came to an end, the families were called one by one to receive the gifts prepared from Friendship Circle of Brooklyn’s Chanukah Toy Drive, held in Zchus of Yissi Spiegel. The toys were sponsored in part by “Toys for Hospitalized Children,” a division of the NCFJE, Mr. Eli Weinstock and family, and dozens of individual gift donations from generous community members. The specially wrapped gifts were set aside with each child’s interests in mind. The smiles on each child’s face as they received their Chanukah gifts spoke volumes! As the beaming children left the hall, they received a dollar for Chanukah Gelt. What a community, what a celebration, what an evening of absolute light, joy, and unity!

The Chanukah Celebration would not have been possible without the help of the caring and dedicated FC team, staff, and volunteers headed by Esther Rimler, Hinda Rapoport, Ruta Cohen, Mushki Tenenbaum, Mussie Procel and Rabbi Mendy Weiss.

We would like to thank our generous donors, without whom none of this would have been possible: Anonymous, Shai and Brushie Denburg, the Shine Group, the Hecht Family, and the Karnowsky Family. We would like to extend special thanks to Rabbi Benny Wolf with the board, staff, and faculty of Beis Rivkah for going out of their way and accommodating FCBKLN with the Rosa Hall for the ever growing crowds. Thank you to Benz’s Food Co. for the Latkes, Binyomin Lerner, and countless others who volunteered their precious time and expertise to make this all happen. Thank you for your ongoing friendship and support!

Please try entering https://graph.facebook.com/947581322063211/photos?fields=source,link,name,images,album&limit=1000 into your URL bar and seeing if the page loads.Facebook API came back with a faulty result. You may be accessing an album you do not have permissions to access.

Please try entering https://graph.facebook.com/947596865394990/photos?fields=source,link,name,images,album&limit=1000 into your URL bar and seeing if the page loads.Facebook API came back with a faulty result. You may be accessing an album you do not have permissions to access.