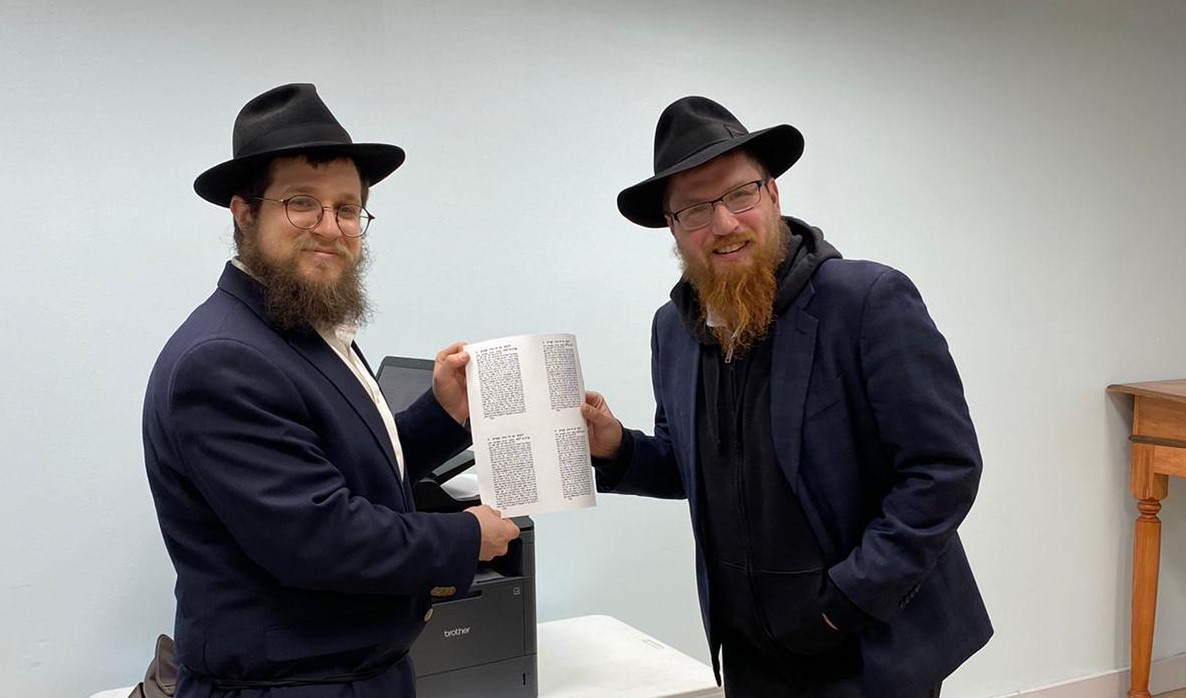 Tables are spread out six feet apart, and the congregation is socially distanced. A few faces are covered in masks. The room is spacious, clean and airy; yet the atmosphere is welcoming and warm. A lone voice calls out words of tefillah to the tune of a Miami Boys Choir song. Moments later, a few voices join for a lively Mordechai ben David melody. Voices drift in and out and then someone belts out a few lines of Avraham Fried’s Udevorov Chaim Vkayomim. Everyone joins in.

This shul is not your run of the mill shul. It is Heichal Baal Shem Tov, and the congregants are boys and young men with special needs. Today, the chazzan is Boruch Shneur, a thirteen-year-old who has Down Syndrome. He fixes his hat and sings the words of shabbos shmoneh esrei from his siddur.

Rabbi Berel Majesky, the rabbi of the shul, stands nearby. “Ready to roll?” he calls out. At his cue, the congregants look into their siddurim, and begin davening mussaf.

The Friendship Circle minyan began in September 2012. “Originally, we gathered for Chanukah parties and Purim parties,” recalls Majesky, who took the reins of Friendship Circle of Crown Heights with his wife, Chani in 2012. But the Majeskys knew that the boys needed a deeper sense of community. A shul, they realized, would bring the boys together and give them that feeling of belonging.

“A few years ago, we made a minyan for the Friendship Circle boys at Mendy’s Deli on Simchas Torah. We had hakafos in the lobby of the Jewish Children’ Museum.”

Boruch Shneur’s mother, Libby, was at the very first hakafos catered directly to the boys of Friendship Circle. “It was pure sincerity,” she recalls. “My husband and I just looked at each other and we both felt like the Baal Shem Tov was there dancing with these holy children. There was a certain holiness that you can’t find in another shul.”

Libby and her husband were so touched by the beauty of this minyan, that they decided to dedicate a Sefer Torah. With a Sefer Torah, the Majeskys were now able to form minyanim on their own.

After that Tishrei, Friendship Circle minyanim began gathering once a month. Eventually, they began making minyanim bi-monthly, until finally, the boys were gathering for minyanim on a weekly basis.

”Now,” says Majesky, “we have a minyan every Shabbos, Rosh Hashana, Yom Kippur, and Succos.” In fact, today, the shul has two Sefer Torahs of its own, one of which was donated by the Chaimson family, in honor of their son’s bar mitzvah.

Majesky fondly recalls the first Yom Kippur minyan, which took place in a private house. “It was shacharis and mussaf,” he says. “There were fifteen boys and young adults. The kids were totally into it. They sang all the parts of davening and opened the aron. In a regular shul they would be sitting in the back. They wouldn’t feel comfortable singing on the top of their lungs.”

Heichal Baal Shem Tov is more than just a shul. It is a place for Friendship Circle boys and girls to celebrate milestones. They have hosted a number of bar mitzvahs, sheva brochos, and other simchas for their members.

R’ Chaim Goldman is one of the regulars. “They recognize anybody and allow anybody to have an aliyah, and sing any song,” says his mother Tzirel Goldman. “Last shabbos, Chaim had an aliyah for his birthday. This is the shul that will give him an aliyah. The boys have ownership of this minyan.”

In fact, everyone in the shul has a job. Yossi calls out the page numbers, Leibel serves the cholent, and Dovid Gad clears the table after the kiddush.

“We have our own chazzan and gabbai,” says Majesky. “The shul is their baby. The older boys see that everyone has their class shul. This is their place. At the kiddush, everyone shares with each other. A dvar Torah, a shout out, or something that happened that week.”

At every age, boys with special needs know that they are completely accepted and appreciated at this minyan. “Boruch Shneur feels like a million dollars when he goes to the shul,” says Libby. “Not only is he included in the minyan, but he even gets hagbah. When he got hagbah for the first time, I could see his face light up. I could imagine them all smiling down in shamayim when he held the Torah.”

In between aliyahs, Majesky asks the minyan questions about the Parsha. After each aliyah, everyone has a chance to answer. “No cheating!” Someone calls out. The group feels completely comfortable in this space. If they get an answer wrong, it’s ok. Everyone is accepting of the person beside him.

For the boys, Heichal Baal Shem Tov is home. Shmuly, who lives at the local HASC residence during the week, goes home to Philadelphia every few weeks. Recently, Shmuly explained to his parents that he could no longer go home for Shabbos, as that would mean missing his beloved Heichal Baal Shem Tov minyan.

It’s not just the boys who love the minyan. Majesky and his ten-year-old son, Mendel, love the minyan just as much as the boys. “I do a lot of administrative work during the week,” Majesky says, “but the part of the week I look forward to most is Shabbos with my boys. Short of davening with the Rebbe in 770, there’s no place in the world that has this direct connection with Hashem. There’s no hindrance. It’s going direct.”

(Majesky noted that the shul isn’t actively looking for more members outside the special needs community).

The boys look forward to Shabbos all week long. It is the high point of their week. They all show up on time, no matter what the weather is like. “They look forward to minyan more than most people I know,” Majesky says.

After Shachris is over, I ask a few of the boys what they love most about Heichal Baal Shem Tov.

“The free food!” One boy jokes. The others laugh.

Boruch Shneur points to Berel Majesky. “I love him,” he says. The boys nod in agreement.

“I love this shul because it feels like family,” says a man of around thirty-years-old.

“I like this shul because I can concentrate and say the words right,” says a fifteen-year-old boy.

The feeling of warmth for each other and love for Hashem is palpable at Heichal Baal Shem Tov. “There are pure neshamos davening in this shul,” says Mrs. Goldman. “This is a very holy place.”