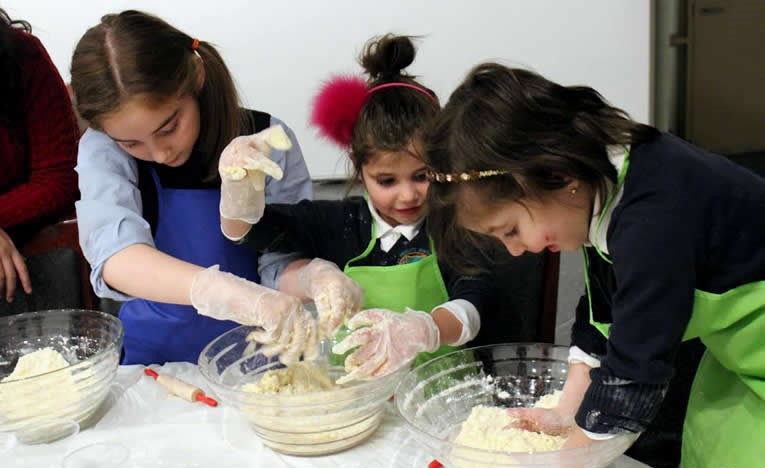 ‘There Are No Kids With Special Needs Here’

Written for Chabad.org by Shmuel Loebenstein

Crêpes will burn if you don’t pour the batter evenly and quickly. On a blustery afternoon in Brooklyn, N.Y., Mussie Procel watched as her class of budding chefs tended to their bubbling pans with the intensity and single-mindedness that only 8-year-olds in a kitchen can possess.

Two girls worked side by side, their little chef hats and aprons askew as they laughed and peeked at each other’s pooling messes. Theirs was a shared childhood experience—those ineffable strands of camaraderie that together weave the fabric of friendship so strong and so tight that adulthood cannot undo it.

Like backyard baseball, a birthday party or camping trip, the afterschool cooking class seemed typical of any of those experiences, another shared moment whose details would get lost in the mists of time, but never its effect.

Typical, except that one child has autism, and the other does not. In fact, about half the class had a range of special needs. But during those moments in the kitchen, those distinctions were lost.

What drove the Friendship Circle of Brooklyn to launch its inclusive afterschool program in 2017? It now offers karate and ballet classes alongside cooking, and I set off in search of the nexus between martial arts, the performing arts and the culinary arts.

I found it in the story that Chani Majesky, co-director of the Friendship Circle, tells about her son.

‘Kids Don’t Look at Each Other Differently’

The Friendship Circle generally distinguishes itself from other organizations serving children with special needs in that it focuses on social, and not therapeutic, needs. The immensely popular “Sunday Circle” program, for example, pairs children with teen volunteers; together, they share a variety of activities.

Chani was somewhat discomfited by conversations she had with her son, Mendel, when he was about 6 years old. Mendel had grown up in the embrace of the organization that his parents run (his father, Rabbi Berel Majesky, is the other co-director), attending every program and joining every outing. Chani would ask him: “Mendel, what do you think of the children with special needs? Do they enjoy it? How can we make it better for them?”

Mendel did not—could not—understand her question. What kids? Who is “them”? Don’t we just play together every Sunday and sometimes go on cool trips together?

Chani says that his innocent confusion led her to realize that “kids don’t naturally look at each other differently.” She thought that if young children could experience enjoyable things together on a “level playing field” at an age when they don’t really recognize any differences, it would help them develop an outlook of equality that would last for life.

“I want to raise a whole generation who sees things like Mendel does,” she says.

‘The Root of Learning’

That’s why the afterschool program is offered only to 8- to-10-year-olds. “Teenagers already see children with special needs as different,” explains Chani. “But when the children in the program become teenagers, they’ll be able to continue to do these kinds of activities. Hopefully, they’ll see things differently.”

Rabbi Majesky believes that the special-needs community is moving in that direction. Inclusiveness and integration are the new goals: children with special needs attend regular schools, go to regular camps, and now go to the same cooking classes and karate classes as their friends. Those who work in the field note the Willowbrook State School scandal in the 1960s as producing waves that continue to ripple through the Jewish community. The first wave took children with special needs out of the shadows and into the spotlight; now, the next one moves them out of the spotlight and into the normalcy of everyday society.

Tobey Lass-Karpel, BCBA, a behavior analyst who consults for the Majeskys, explains that such inclusiveness further propels the development of children’s skills. “Motivation is the root of learning. Having peers and fun activities, and being in a setting where they are simply one of the kids just like everybody else—that feeling of belonging—could motivate them to try something new, to communicate something they haven’t before.”

At the Friendship Circle, the integration is likewise seamless. When Esty Raskin’s typically-abled daughter, Chana, returned home from the afternoon program, she told her mom about the hilarity and hi-jinx of her cooking class. Esty fired off a “thank you” email to the Majeskys, but was perplexed: “Were there any kids with disabilities in the girls’ class?” she asked. “If there were, Chana didn’t know about it.”

Please try entering https://graph.facebook.com/940107912810552/photos?fields=source,link,name,images,album&limit=1000 into your URL bar and seeing if the page loads.Facebook API came back with a faulty result. You may be accessing an album you do not have permissions to access.

Please try entering https://graph.facebook.com/940106792810664/photos?fields=source,link,name,images,album&limit=1000 into your URL bar and seeing if the page loads.Facebook API came back with a faulty result. You may be accessing an album you do not have permissions to access.

Please try entering https://graph.facebook.com/936346349853375/photos?fields=source,link,name,images,album&limit=1000 into your URL bar and seeing if the page loads.Facebook API came back with a faulty result. You may be accessing an album you do not have permissions to access.