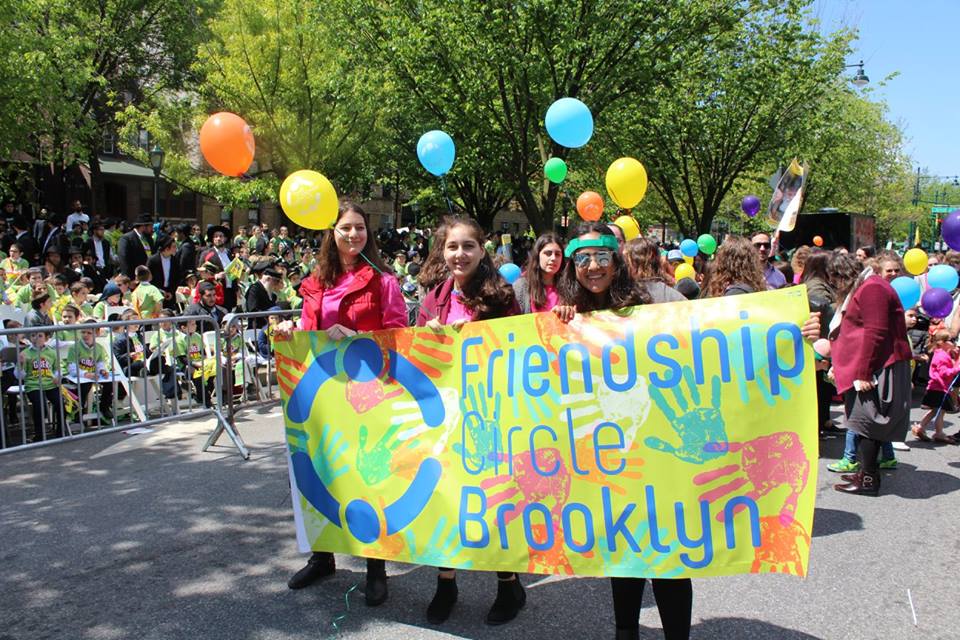 In Brooklyn, New York, a huge parade was arranged by the NCFJE, bringing together people from all different backgrounds and from many different walks of life. The full-day celebration—parade and fair—is themed on Jewish unity and pride, leaving each participant uplifted and feeling proud of who they are. The Great Parade is based on the legacy of Mesibos Shabbos and Lag B’Omer parades have been held on Eastern Parkway since the 1940s.

Thirteen years ago, at the Lag B’Omer Parade, among the throngs of people gathered, sat one mother feeling alone. Looking around her, she felt a huge sense of loss. Her child, who was about to begin attending a special-ed school outside of Crown Heights, had no place in the community where he belonged. As the parade began, a very small group of children escorted by their parents and a handful of volunteers, made their way down the Parkway. As they passed her seating area, tears welled up in her eyes, as she realized that her son did in fact have a place, a very special place, with the Friendship Circle of Brooklyn.

Fast forward thirteen years to 2017. At this years Great Lag B’Omer Parade, the Friendship Circle had a huge presence. Bringing together 150 children, parents, volunteers and supporters, there was no question whether or not these children belong here in Crown Heights.

“A few years ago we sat down with the Parade committee to work out a plan to make sure every detail would facilitate our special group,” said Rabbi Berel Majesky, Director of Friendship Circle. “Our families need to know that their children have a place right here, along with their siblings, in our community. Our goal at the Friendship Circle is to promote inclusion for people of ALL abilities. What better way than having these special children join in this huge community event.”

The parade office was extremely receptive to the ideas put forth and arranged to have Friendship Circle sit in a larger than normal size seating area to accommodate the necessary strollers and wheelchairs, something not allowed in any other seating areas. Special sensitivity was taken when seating the group, ensuring the children would not get overwhelmed by having other larger and louder groups seated on either side of them, even making sure that the group had clear sight of one of the few giant screens placed throughout the parade, ensuring the children wouldn’t miss one minute of the jam-packed show. Local schools gave their students permission to join the Friendship Circle at the parade, assisting parents, bringing joy and laughter to all the children in the group.

“My time with the Friendship Circle children is always precious. But being singled out to volunteer with them at the parade was very special,” says one volunteer. “The kids were so excited, dancing and singing along to all the musical entertainment. We usually visit our special children in their homes, but seeing the large group, with all the volunteers and their special buddies, made us all feel like we were taking part in something much bigger.”

The NCFJE went out of their way to pay special attention to the groups needs and invited them to be the first out of 106 groups to march in the parade. “We really wanted to do our best to create an inclusive environment at the parade,” said Shimon Sabol, the parade coordinator. “Thanks to Rabbi Majesky’s advice, we were able to grasp the specific needs of the group. We understood that this is one of the few and rare occasions where the special children in this community get to join in and be a part of a community event of this magnitude, and we needed to do everything that we could to make it a most memorable and positive occasion.”

The Friendship Circle families couldn’t have asked for a better day, as they proudly marched down Eastern Parkway, to the cheering of 25,000 spectators. The unity and strong feelings of inclusion and acceptance were palpable on that bright Suday morning.

Please try entering https://graph.facebook.com/833966456758032/photos?fields=source,link,name,images,album&limit=1000 into your URL bar and seeing if the page loads.Facebook API came back with a faulty result. You may be accessing an album you do not have permissions to access.